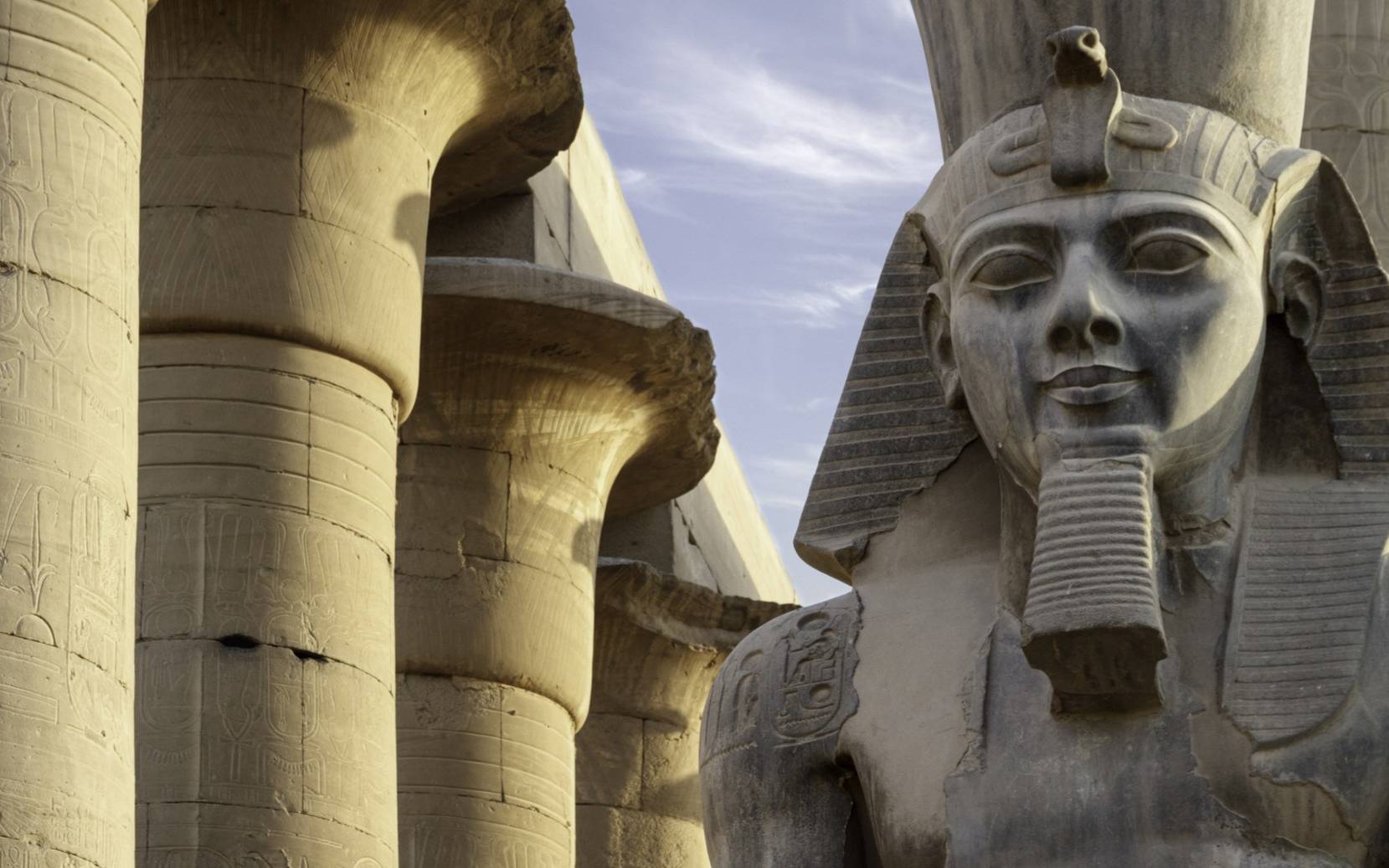 The Best Things To Do In Luxor

Mammoth sized statues, immense temple complexes and secret tombs tell the tale of the dynasties which once ruled in splendour from this city on the banks of the Nile. And thousands of years later, these ruins continue to amaze the modern world every bit as much as they did the ancient. Welcome to Luxor, one of Egypt’s many crown jewels. With a name which actually means ‘Palaces’, it couldn’t be more aptly named, thanks to being the location with the greatest number of sprawling ancient complexes. Luxor is located in western Egypt, south of Qus and Quena and east of Kharga. It is also situated north of Esna, Edfu and Aswan. A vacation to this riverside city comes with the opportunity to experience traditional Egyptian hospitality, enjoy a leisurely boat ride along the Nile and explore the vast complex of temples and tombs which dot the desert landscape. There is simply no doubt that a holiday in this wonderful city is quite unlike any other and will create some of the best memories of your Egyptian trip.

Its impressive collection of trump cards in terms of tourist attractions means that Luxor, in spite of being slightly less populous than its other rivals, is actually one of Egypt’s most visited cities and a key flight hub in the region. Visitors who have been exploring Cairo’s museums and maze-like bazaars will be able to alight at Luxor International Airport following a one-hour flight. The coastal city of Hurghada, on the other hand is five hours away while Sharm El-Sheikh which is also located on the coast is a three and half hour flight trip away. In Luxor itself, minibuses are the transport mode of choice and each one of them serves a set route. Renting a motorbike is a viable option and bicycle rentals are even easier thanks to an abundance of shops and hotel schemes dedicated to this purpose. Taxis are also a flexible and convenient means of getting around and are readily available.

In a nation with an abundance of excellently preserved ruins, there is one which stands head and shoulders above them all in sheer size and detail: The Temple Complex of Karnak. The mammoth sized buildings – and their longevity, too – are a testimony to the grandeur and ambition of the sovereigns who ruled the region during Egypt’s golden era. Glancing at the colossal halls, it is so easy to imagine that they might have been built by giants and there is no doubt that the hours spent touring this complex of ancient wonders is bound to be one of the highlights of your Egyptian adventure. For a peek at daily life in ancient Egypt, a visit to the Tomb of the Nobles comes highly recommended. The most famous of them all include the tombs of Benia, Menna and Nakht which are especially renowned for their excellent murals depicting the theme in living colour. If you intend to build up your anticipation of walking among these majestic ruins, you can actually book an air balloon tour. You will get to sail the Nile on your way to the embarkation spot before going airborne and admiring Luxor as you float leisurely above the city. 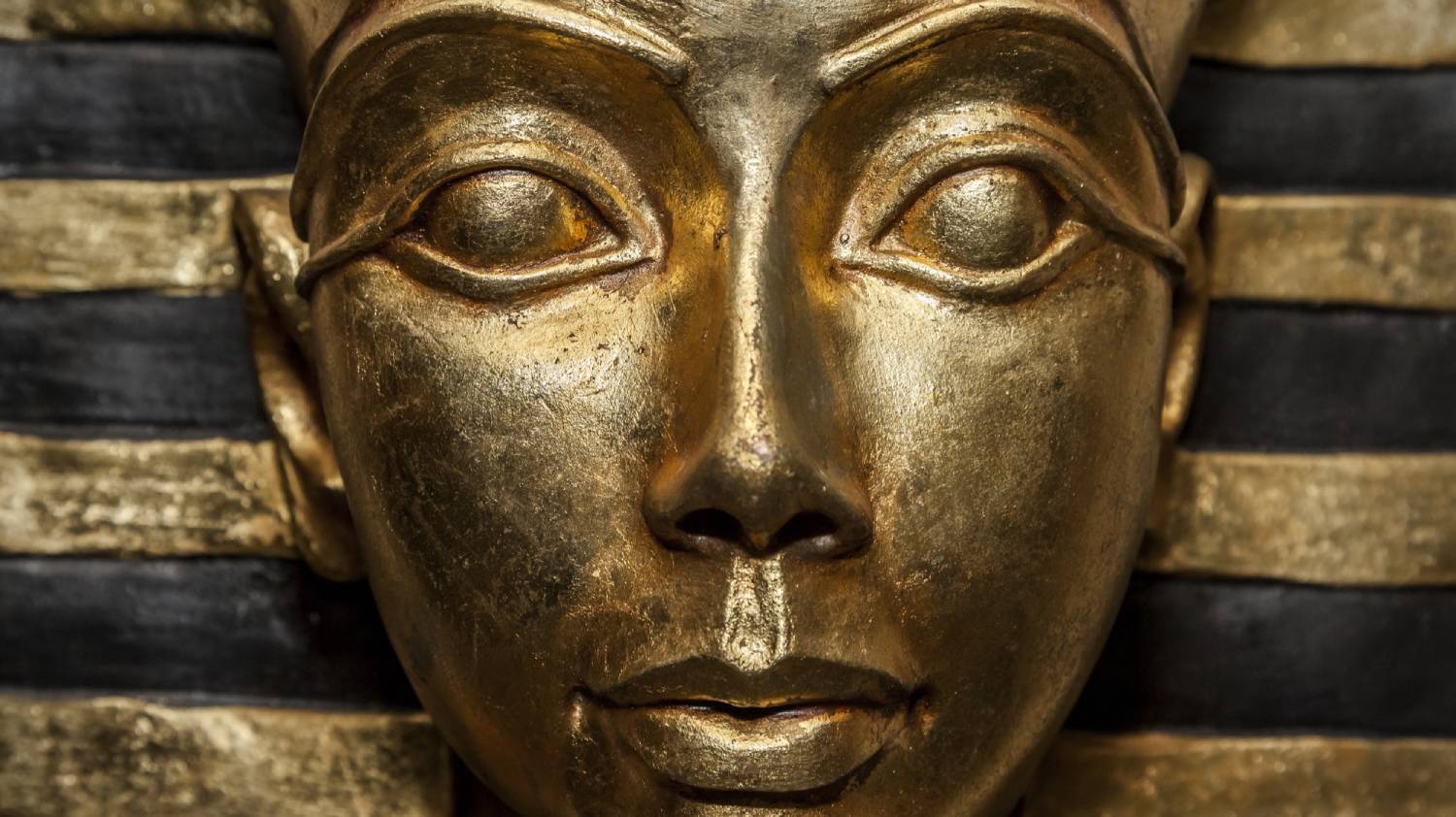 While it’s not the largest museum displaying Egyptian ancient history in the world, the Luxor Museum is indeed a favourite, due to the quality of its exhibits and their excellent presentation and explanation. You will certainly enjoy this trip to ancient Egypt, with fascinating displays, including a horse carriage and weapons from the tomb of Tutankhamun, and sculptures depicting Amen Hotep III. There are mummies with the bandages removed, and many exhibits sourced from local excavations too!

Valley of the Kings

Just west of Luxor, you will find the mysterious Valley of the Kings. It’s in this harsh environment – for five centuries – the tombs of the rich and powerful were carved into the surrounding limestone cliffs. While there are many tombs available to see (over 60 discovered to date), it’s recommended that you take the time to study only a few, carefully exploring in detail, the chambers within the tombs, and the fascinating frescoes and wall reliefs. 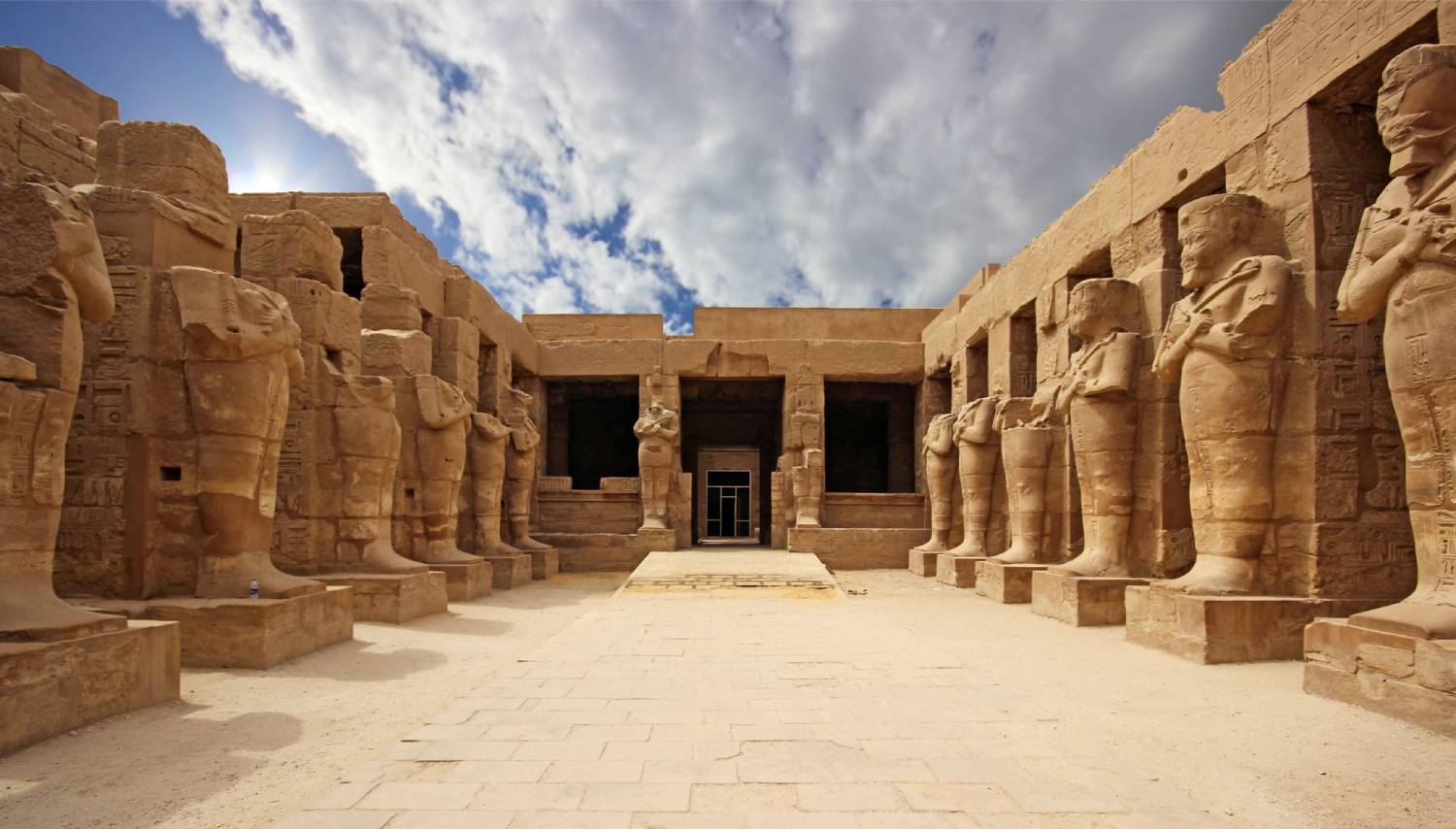 A visit to the Temple of Karnak will amaze you; you quickly discover the sheer size of the original temple must have been massive! The temple complex covered 200 acres and was considered Egypt’s most sacred site for almost 2000 years. As kings sought to ensure their temple was grander than their predecessor, the complex became an ever growing, living history book. The ruins of this complex of temples, chapels and service buildings are fascinating, and if you visit in the evening, don’t miss the Sound and Light Show telling the story of the history as you explore. 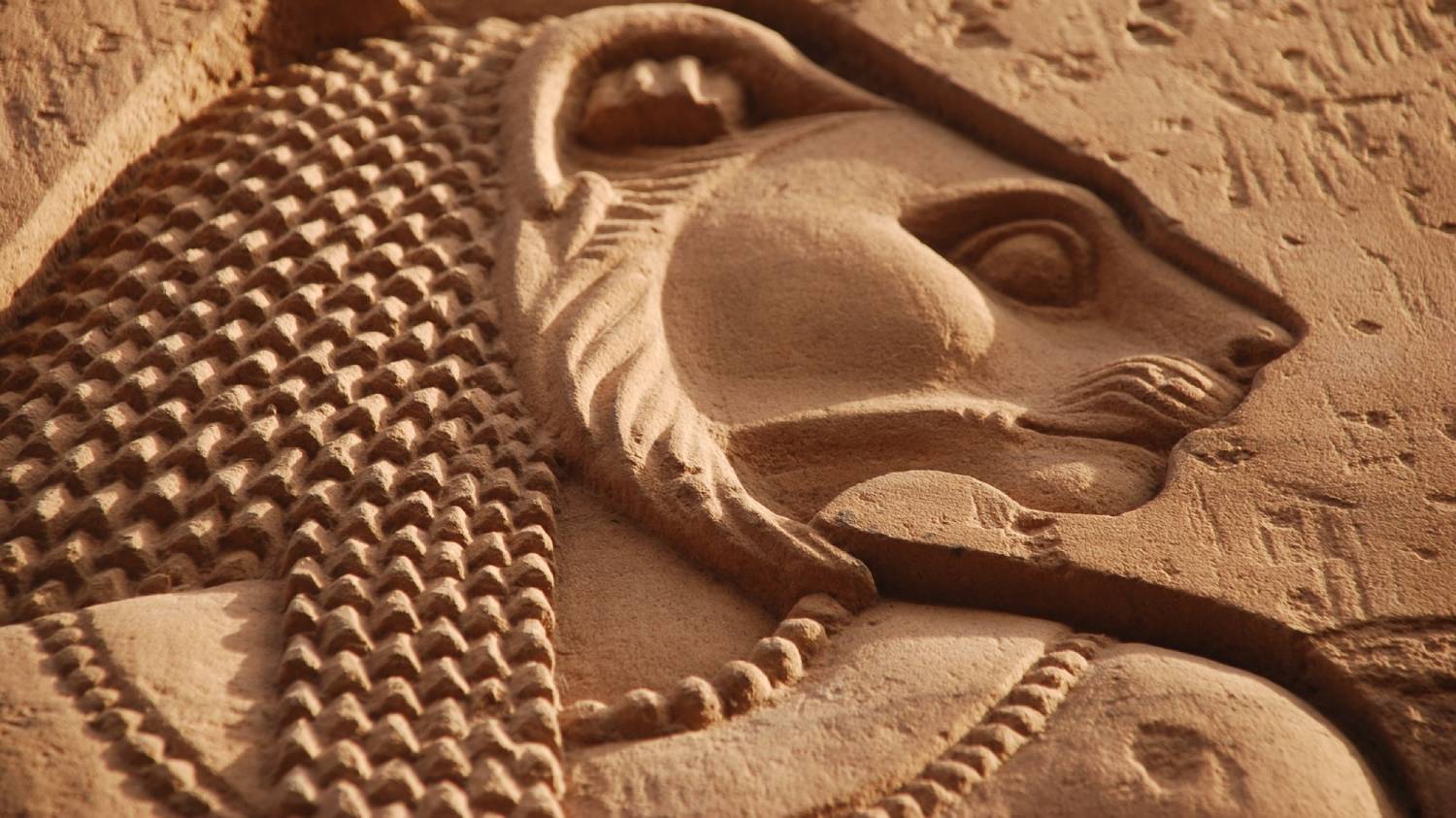 Just 60 kilometres north of Luxor you will find the small town of Dendera (Dandarah), and one of the best preserved temples complexes in Egypt – the Temple of Hathor. Explore the ruins of this beautiful temple, and absorb the ancient history told through the carvings and wall reliefs, that include depictions of Cleopatra VII. 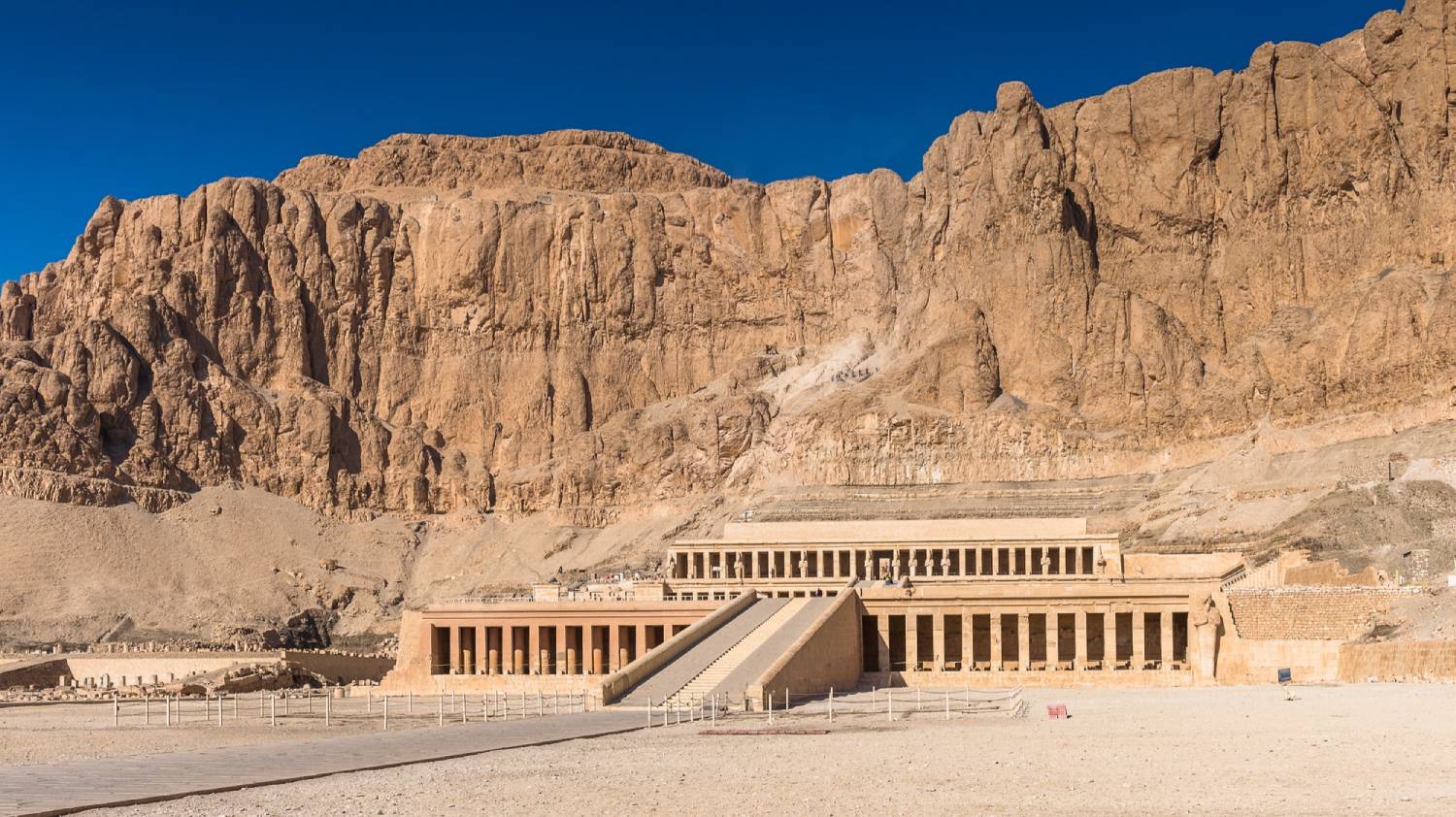 Located near the Valley of the Kings, make sure you visit the majestic Temple of Hatshepsut (Deir el Bahari). This most impressive mortuary temple of Queen Hatshepsut, is spread over three terraces with majestic columns, and is carved into the cliffs overlooking the Valley of Kings. As you enter the beautiful interior make sure you explore the amazing wall reliefs and hieroglyphics! 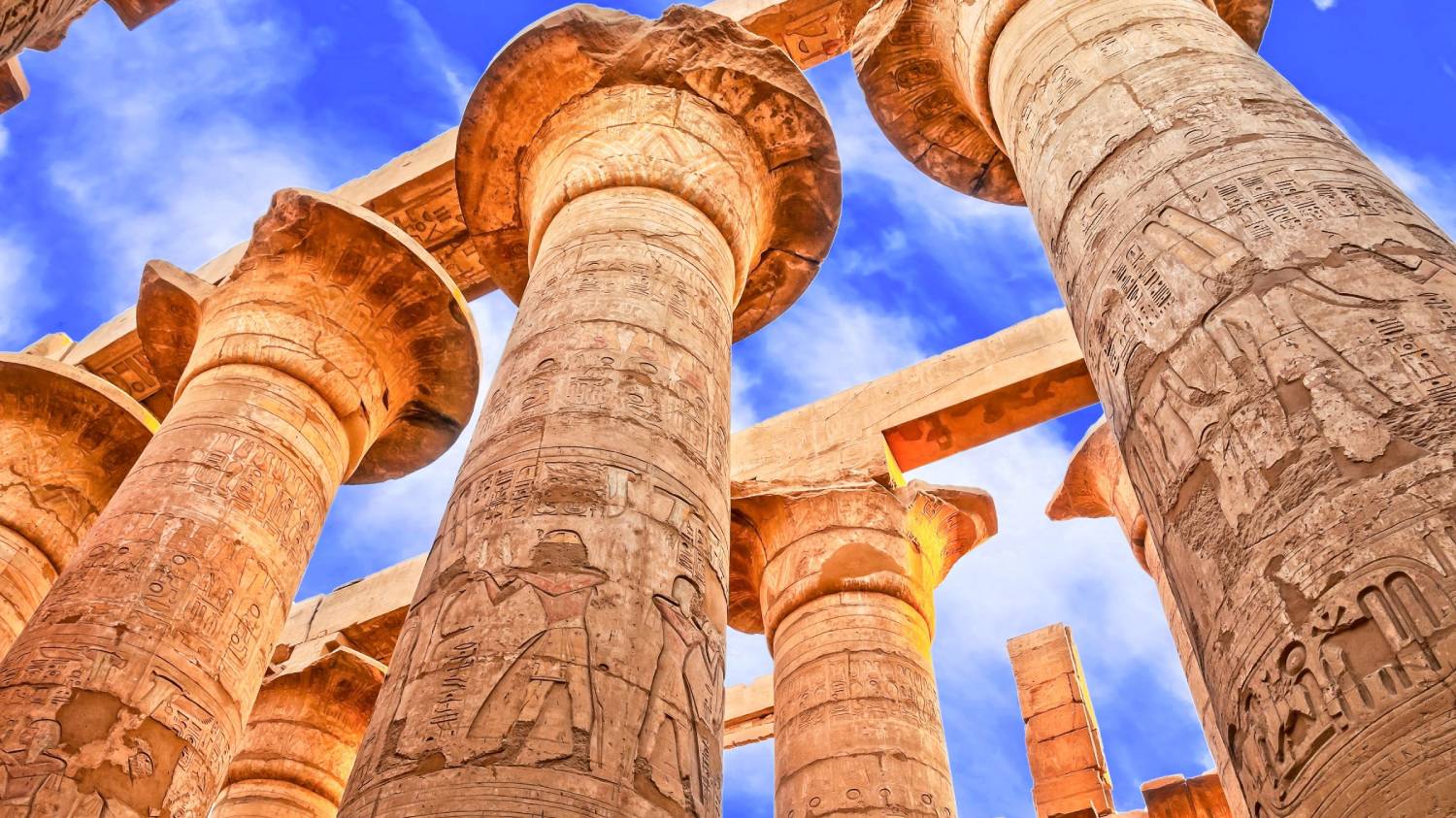 The Luxor Temple has played an important role in the life of Egypt since 1400 BC, when this enormous temple was the site of ceremonies such as the crowning of a king. The temple evolved over time, being used during the Christian era, and then later as a mosque. As you approach the temple, the scale of the achievement in ancient times will hold you in awe – you will discover statues, sphinxes, and carvings and columns from one of the most amazing temple complexes in Egypt!

Valley of the Artisans (Deir el-Medina) 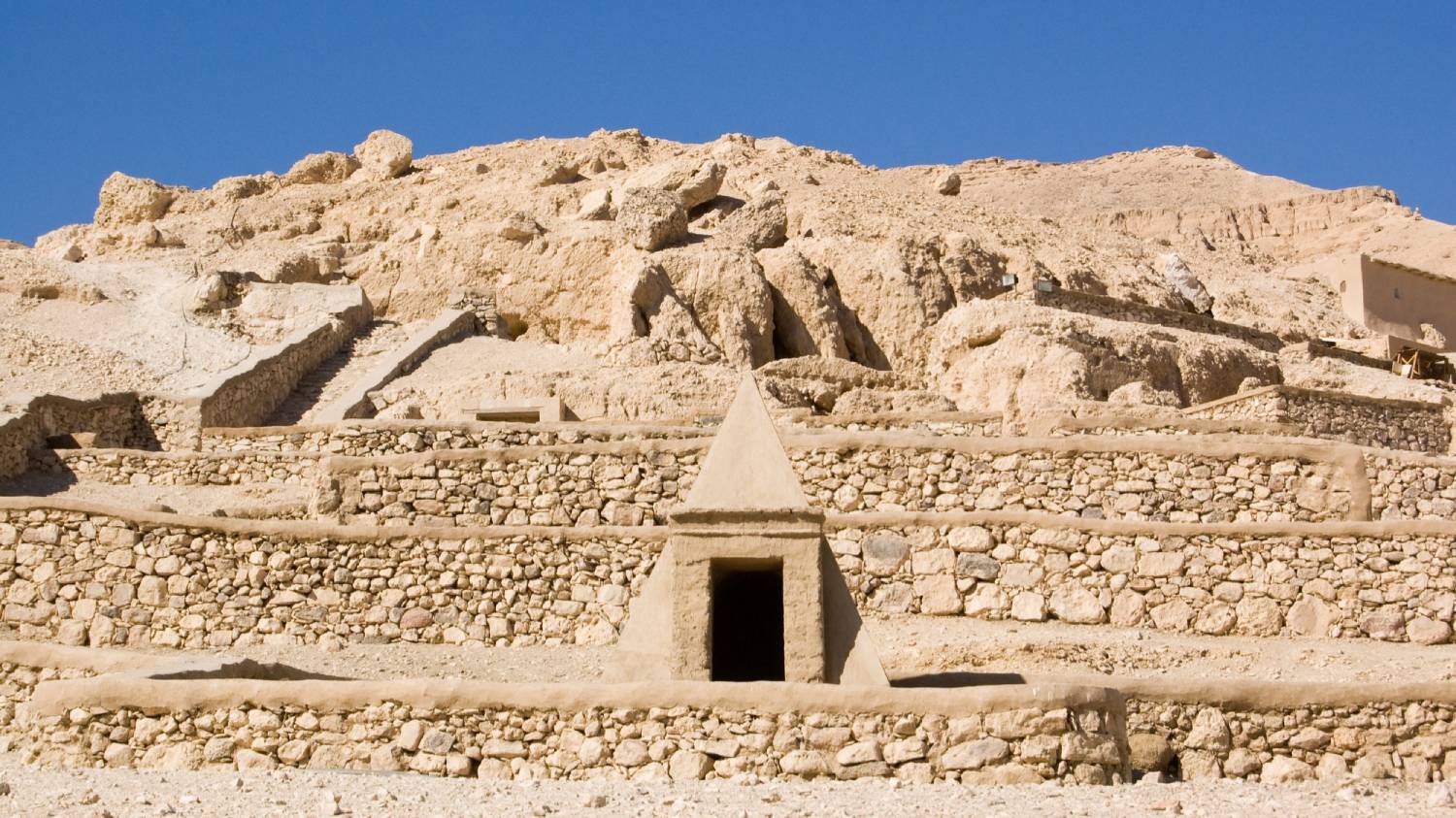 The army of craftsmen and labourers that were required to build the tombs in the Valley of the Kings had to live somewhere, and that site was the Valley of the Artisans (Deir el Medina). While not sharing the grandeur of the creations these people built, these well preserved ruins provide a fascinating insight into the life of the workers, with wall paintings and tombs to enjoy as you wander through the site.

Tombs of the Nobles 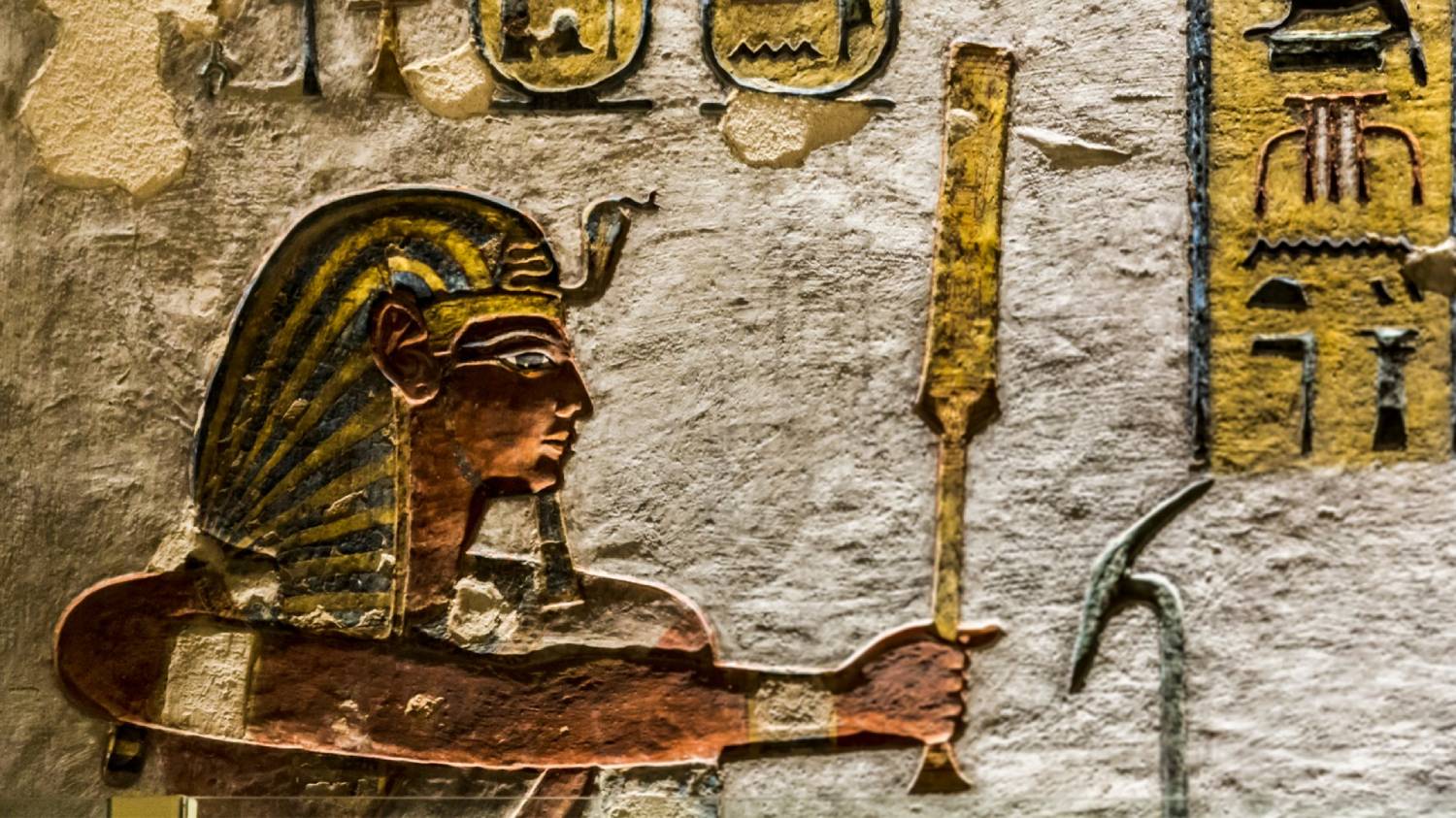 A visit to the Tombs of the Nobles (Valley of the Nobles) is fascinating, as the walls come alive to tell the story of each person that was entombed there. There are hundreds of tombs in this valley and it is best to visit those that have particularly well preserved art; two examples are the tomb of Sennofer, and the tomb of Ramose. This visit will show the contrast to the splendour of the Valley of the Kings. 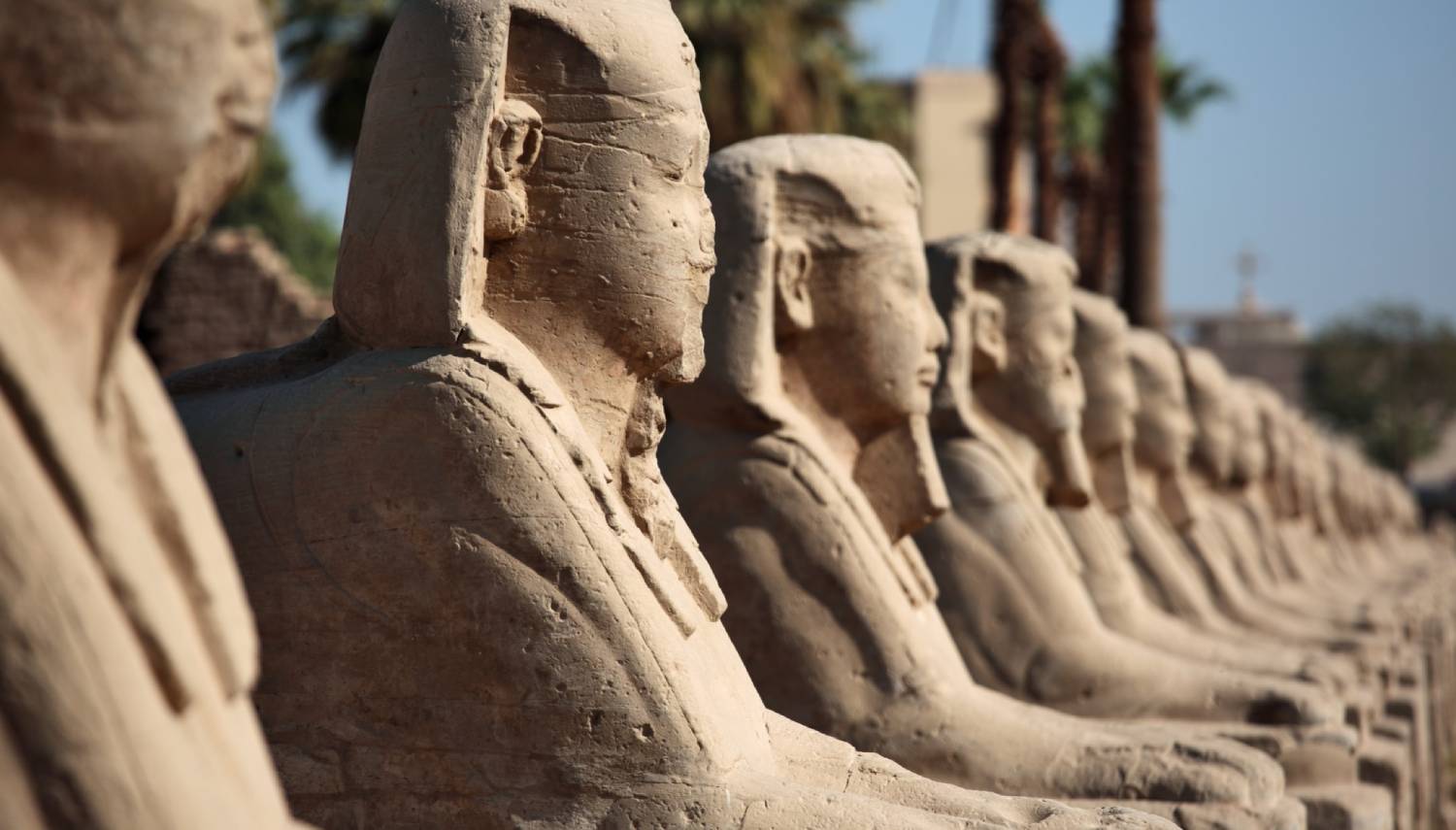 Imagine back to 380 BC; 1350 sphinxes line the one and a half mile avenue, as the majestic procession moves between the temples of Luxor and Karnak. The achievements of this ancient civilisation are just awe-inspiring. Today, you can cover the full length of the avenue, and while several sphinxes have disappeared over time, there are still impressive examples as you approach the temples. For visitors to Luxor, this a must-see!

Across the River Nile from Luxor, is Ramesseum, a huge mortuary temple dedicated to Ramses II. While the ruins are not in good condition, there is plenty to explore and lots to learn. The wall reliefs tell the stories of military victories, and the statues show the grandeur of the original structure, which took twenty years to build and was a significant accomplishment of Ramsese’ sixty-seven year reign. 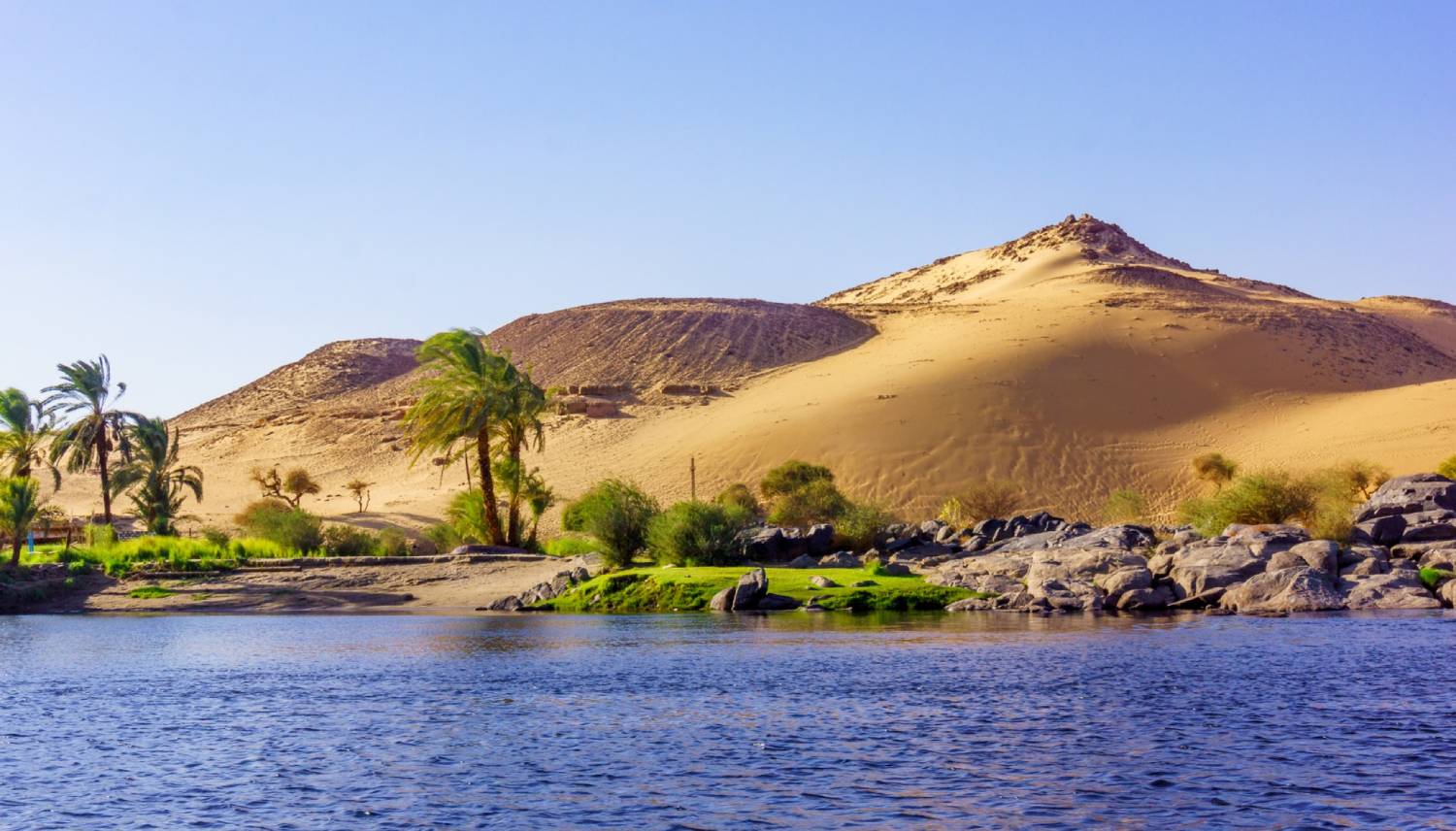 Arguably the longest river in the world – at 6680 kilometres long – the Nile River flows through eleven countries. From ancient times, the river has been the lifeblood – and primary water supply – of the countries it flows through, but nowadays it’s a great way to explore history and culture on a cruise, seeing major landmarks as you glide along its famous waters.