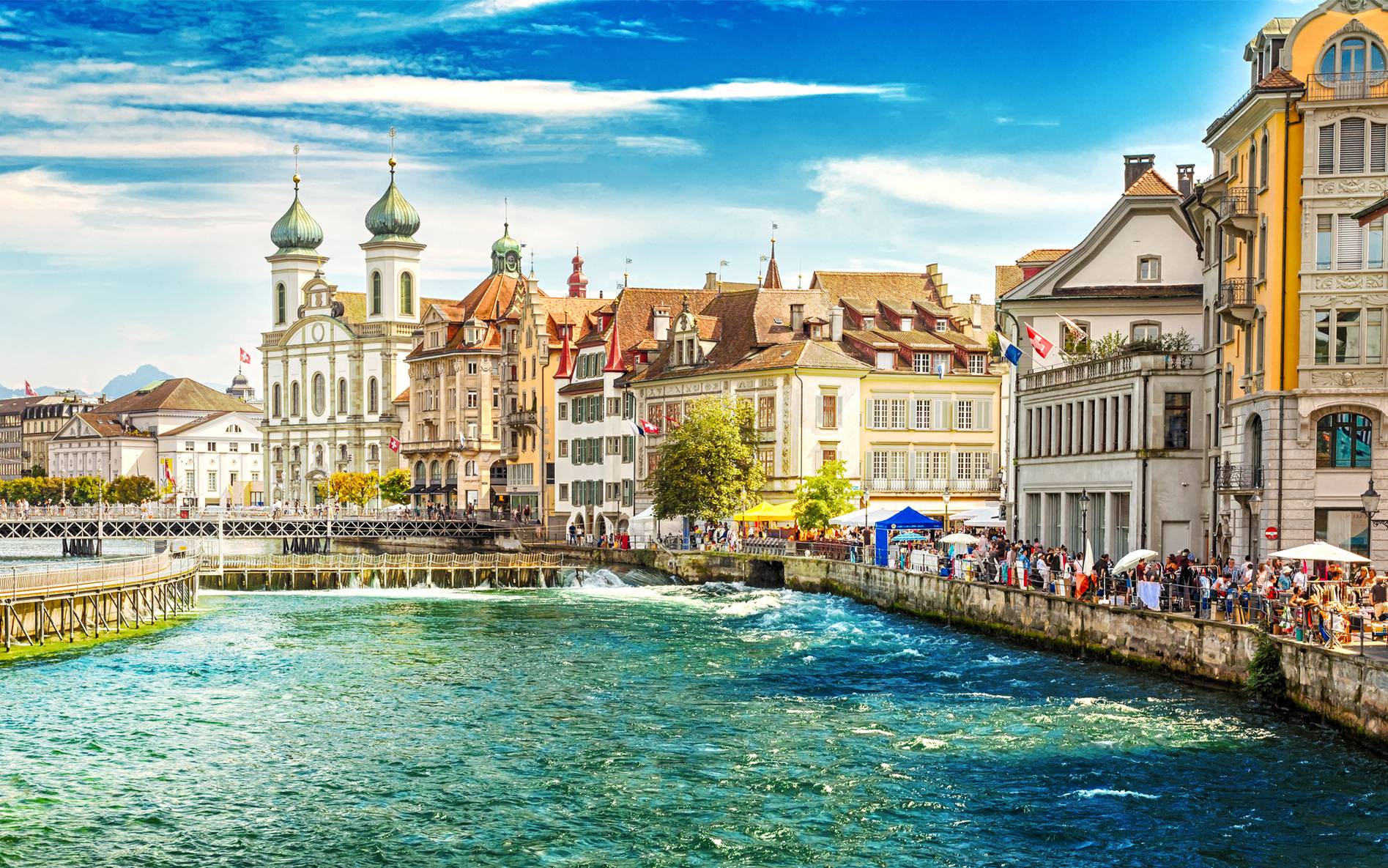 The Best Things To Do In Lucerne

When it comes to Switzerland, it’s nearly impossible to say that one city is better than any of the others — and it’s truly the case in regard to Lucerne. Situated in central Switzerland and, like many other of the populated cities, is located on Lake Lucerne. Visitors to the city will marvel over the panoramic views, mountain ranges that surround the region, as well as the peaceful and breathtakingly beautiful lakeside ambience. Lucerne is a perfect destination to spend some time in, but it is also a stopping point for many visitors who are traveling onto the nearby mountain regions or headed from one part of the country to the next.

What makes Lucerne stand out from other Swiss cities? It’s similar to taking a step back in time — there are many medieval influences and landmarks still located throughout the city that offer such an old world feel and add to the overall atmosphere. As you walk throughout Lucerne, you will no doubt notice the various historic homes that still stand and are situated throughout the town squares — Lucerne is pretty famous for all of the churches and squares that are still standing. One of the best-known landmarks in the city is a wall known as Museggmauer – one of the remnants from the medieval period. Chapel Bridge is also a city icon and is thought to be one of Europe’s oldest covered wooden bridges.

For those planning to spend some time in Lucerne, there are some exceptional ways to get out and explore the surrounding region – a steamship cruise that takes you throughout the breathtaking beauty of Lake Lucerne is a fabulous daytrip, or you can head to one of the impressive mountains for a day of hiking or picnicking. When you want to explore a little further out, the Gotthard Panorama Express transports visitors from Lucerne to the Alpine Ridge and other Swiss destinations. Art and culture are also prevalent throughout Lucerne — one of the most visited museums in the country is the Swiss Museum of Transport, which has a unique collection of transportation exhibits as well as in IMAX Cinema. 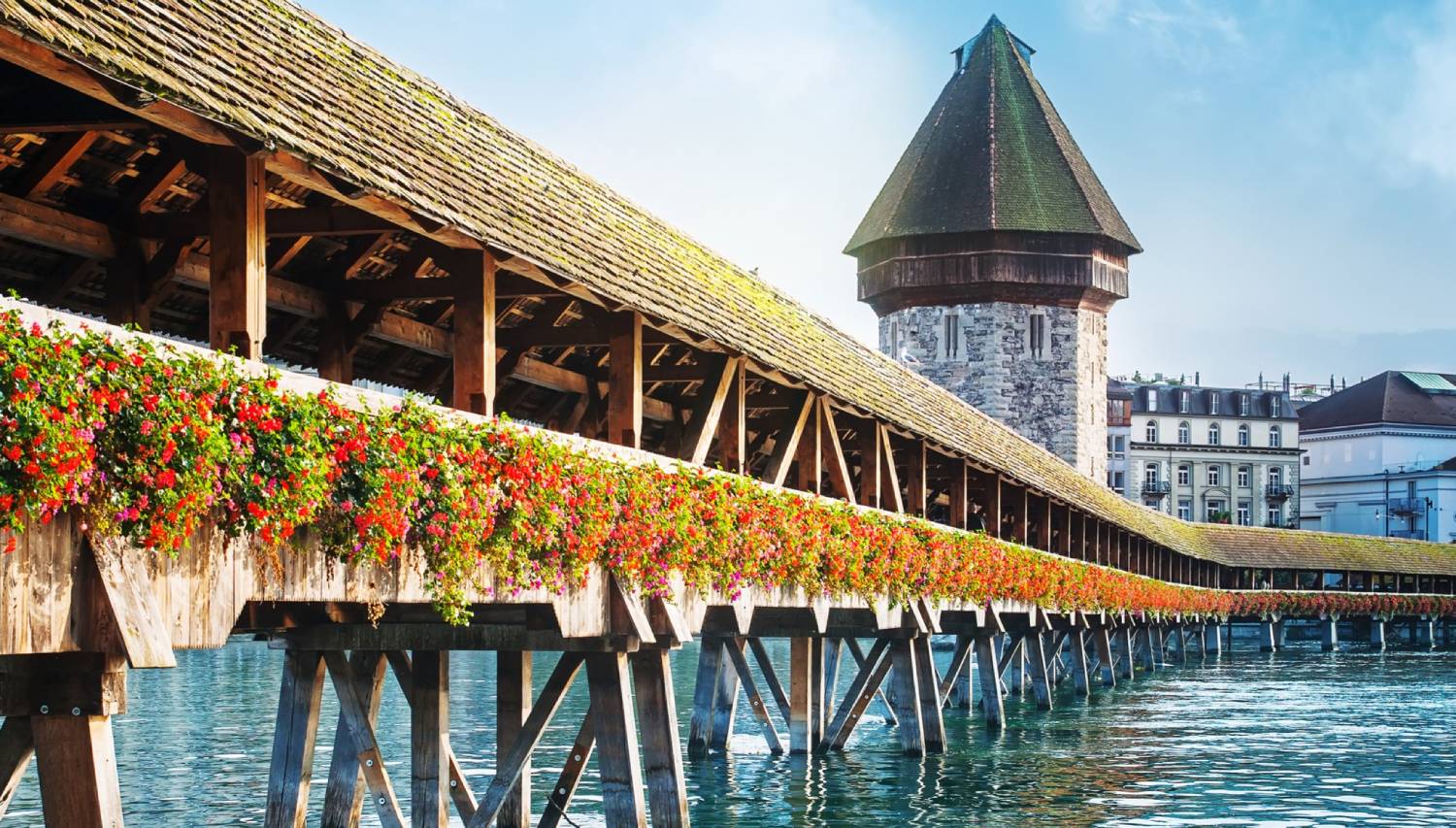 When visiting Lucerne, make sure you take a stroll along the roofed Chapel Bridge (Kapellbrucke), one of the oldest wooden bridges in Europe, dating all the way back to the mid-1300’s! Originally designed to be part of the city’s defence, it later went on to serve as a prison, a torture chamber, and even the treasury for the city! Today, this beautiful bridge is nothing more than a romantic backdrop across the Reuss River. 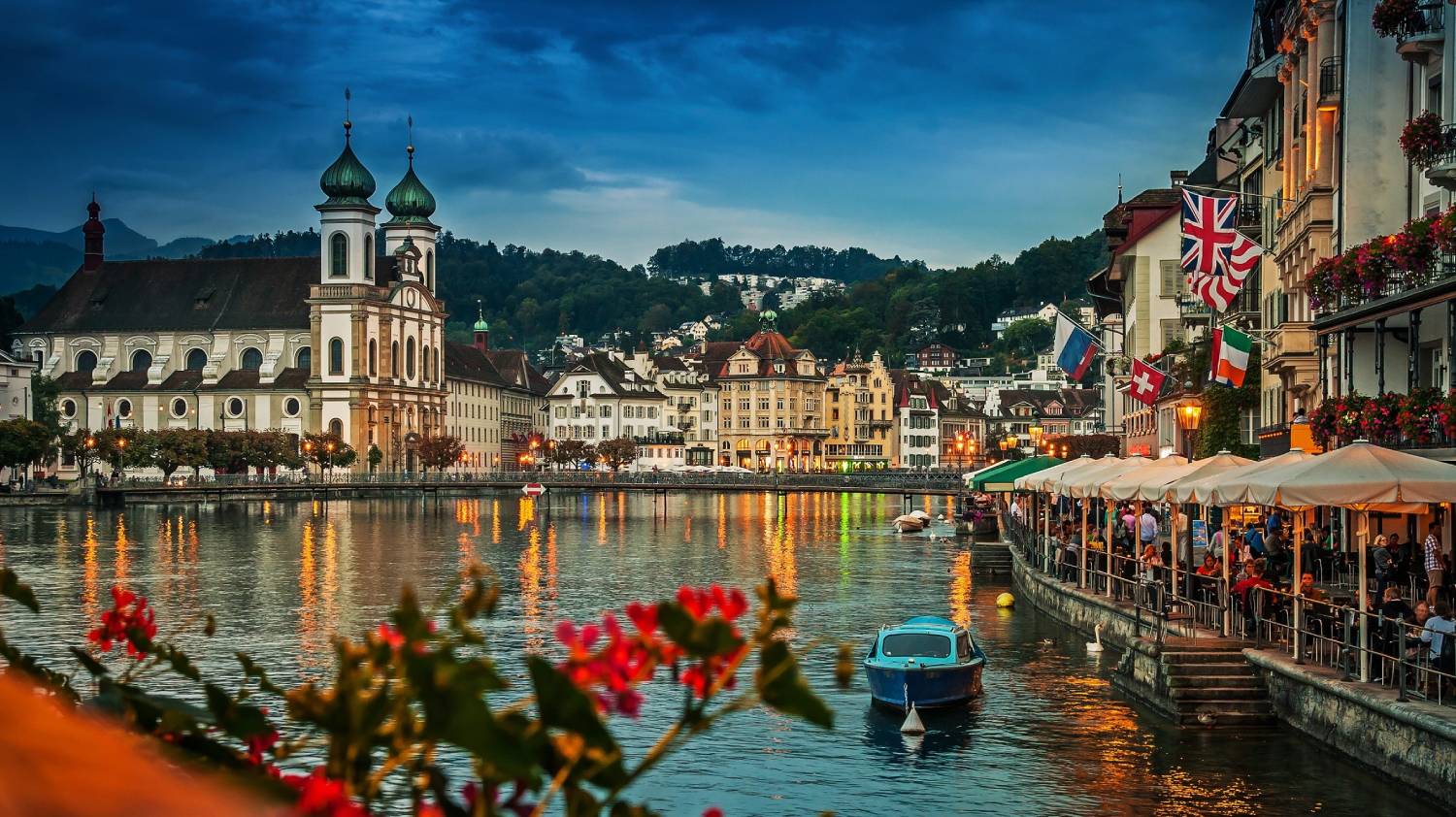 Lucerne is a nothing short of picture perfect, and a walking tour of Lucerne Old Town provides a new and exciting twist every time you turn a corner. The cobblestone laneways are surrounded by historic buildings, and you are never far from the next landmark, such as the Lion Monument, the Picasso Museum, or the Town Hall. The Reuss River and the lake are also a stunning backdrop, so enjoy a meal and relax as you take in the ambience of this amazing setting. 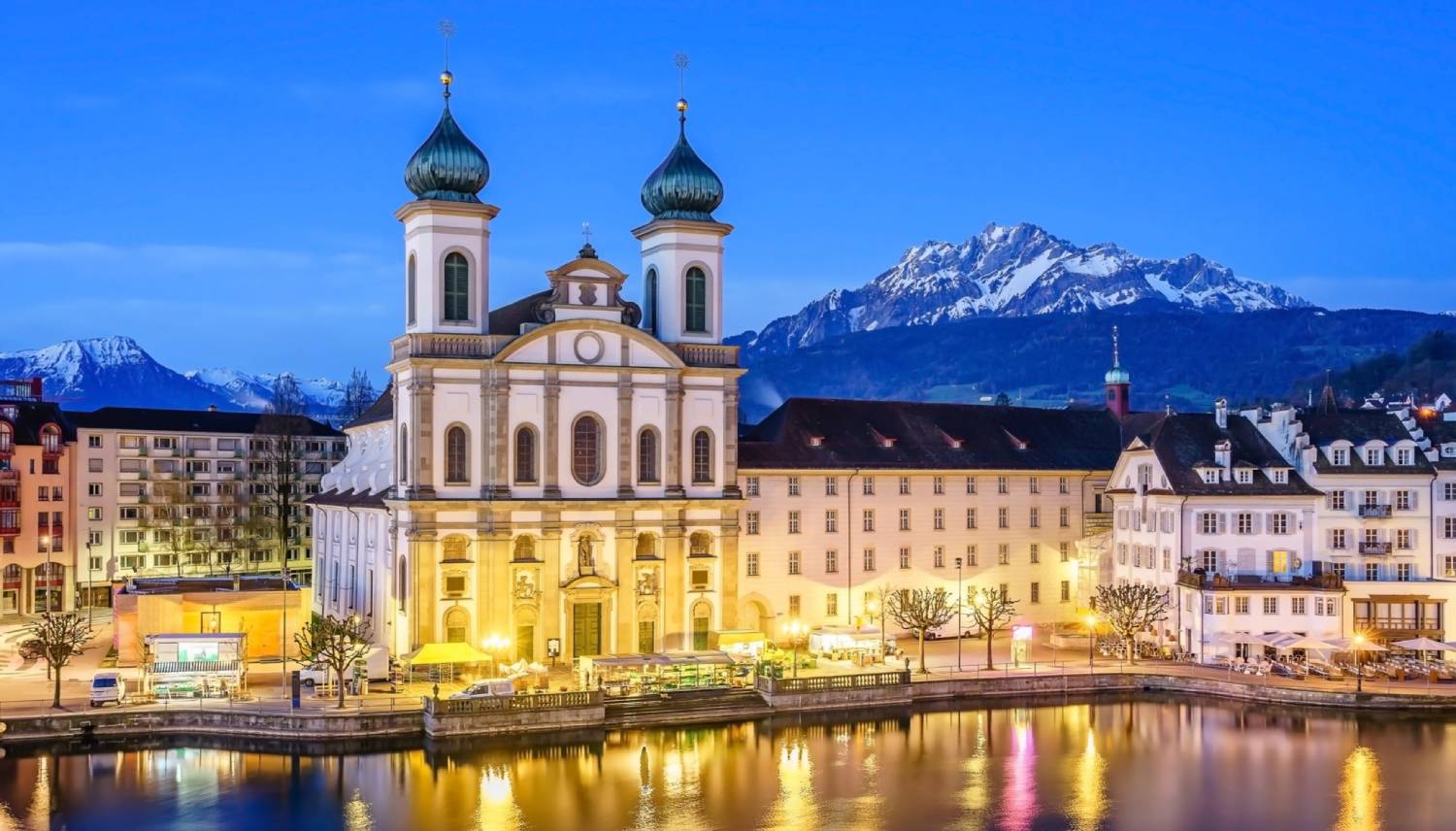 The stunning Baroque exterior of the Jesuit Church in Lucerne dates to the seventeenth-century, when the Catholic Church was asserting its strength in the region. Wander inside and admire the opulent interiors, the statues, and the decorations that are so very detailed and well maintained. 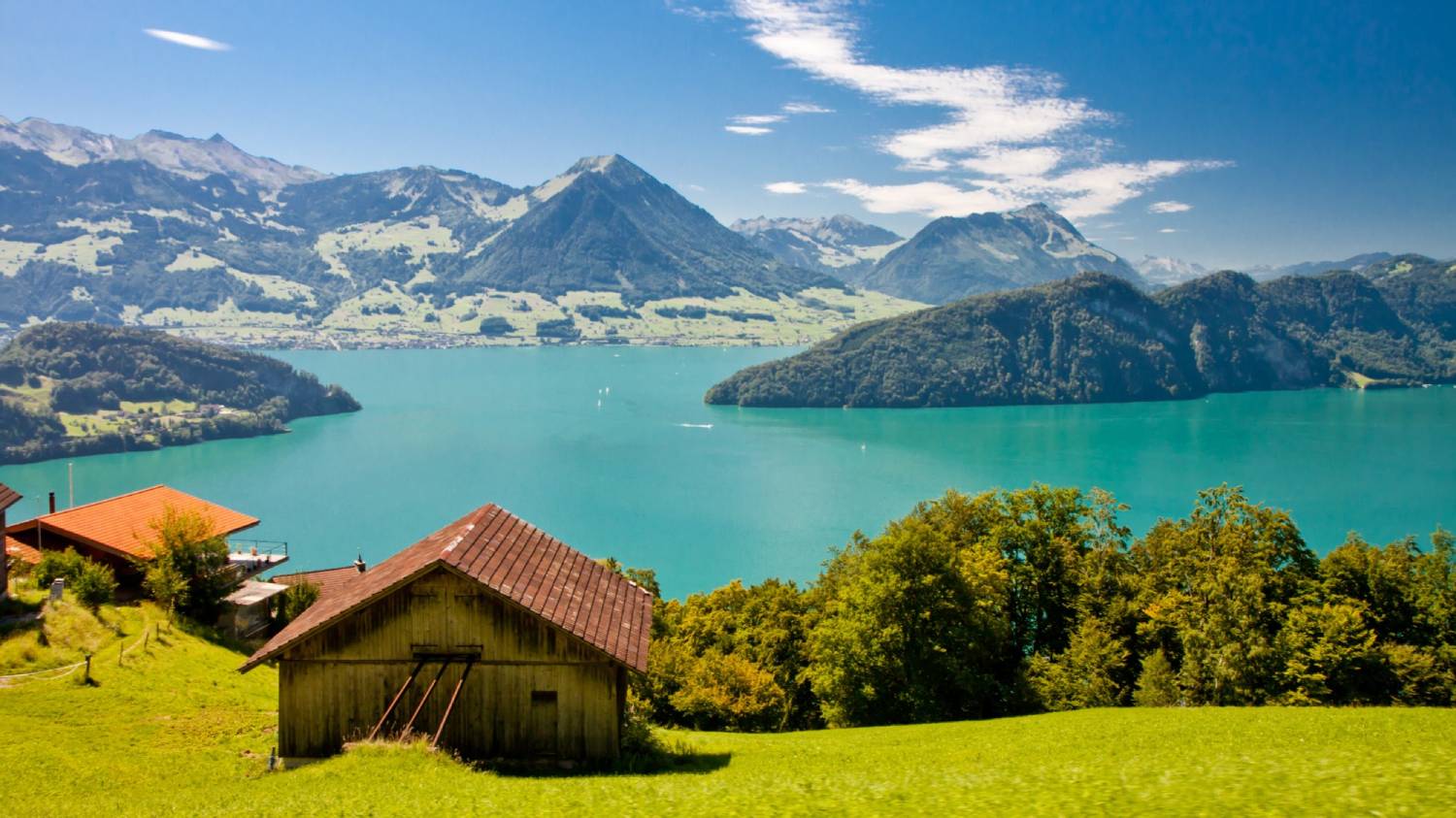 Lake Lucerne is the 4th largest lake in the country and has complicated shape that curves into the mountains and the city of Lucerne. The lake’s has a total area of 114 square kilometers (44 sqare miles). The lake and shoreline have many stunning views, especially of Mount Rigi and Mount Pilatus. 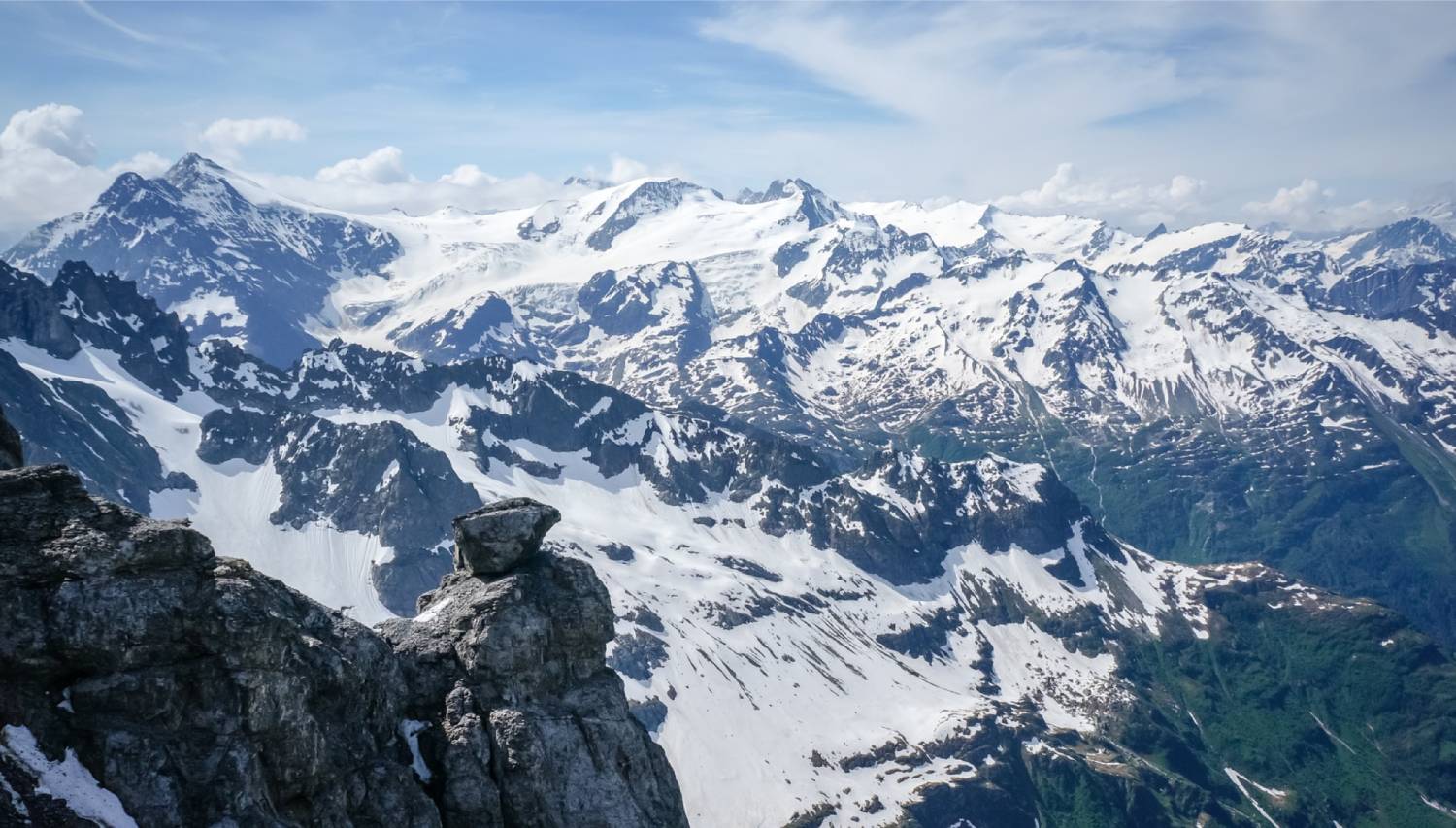 Visit the highest mountain in central Switzerland – Mount Titlis – and enjoy its stunning natural beauty at the top of the world. Reaching over 3,000-metres high, experience the amazing views and the magnificent crevasses, cliffs and waterfalls, and then retreat to the creature comforts of one the beautiful restaurants on offer! 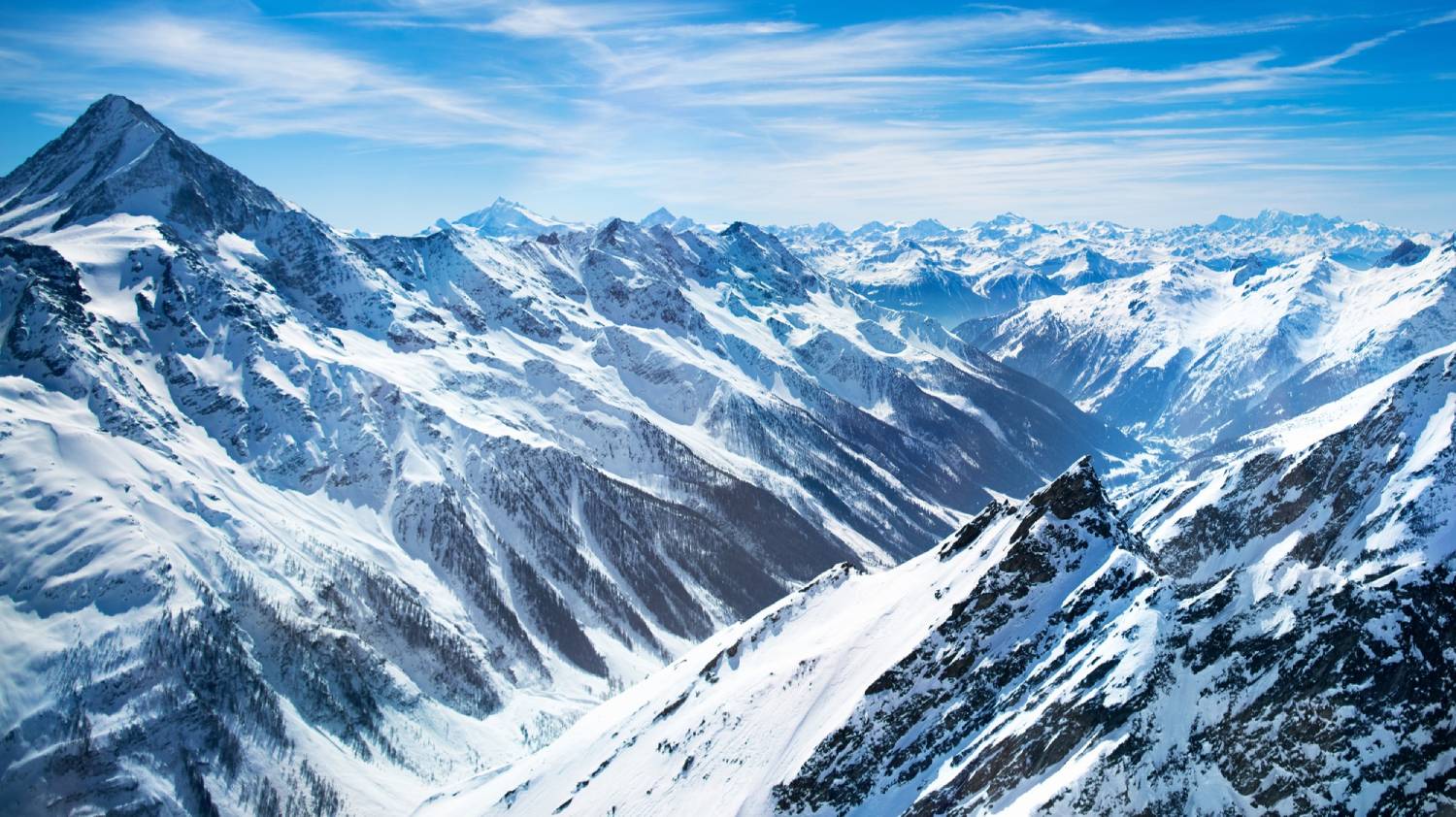 Natural beauty combines with engineering brilliance when you take a trip to the Jungfrau Glazier (Jungfraujoch); a magnificent saddle connecting two towering peaks. Take the cog railway – through long tunnels and past stunning landmarks – and admire the tenacity and expertise that was demanded to achieve this transport passage. Once you arrive at your final destination – 3,454-metres above the ground – take in the stunning views of the surrounding landscapes, which stretch for miles in all directions. 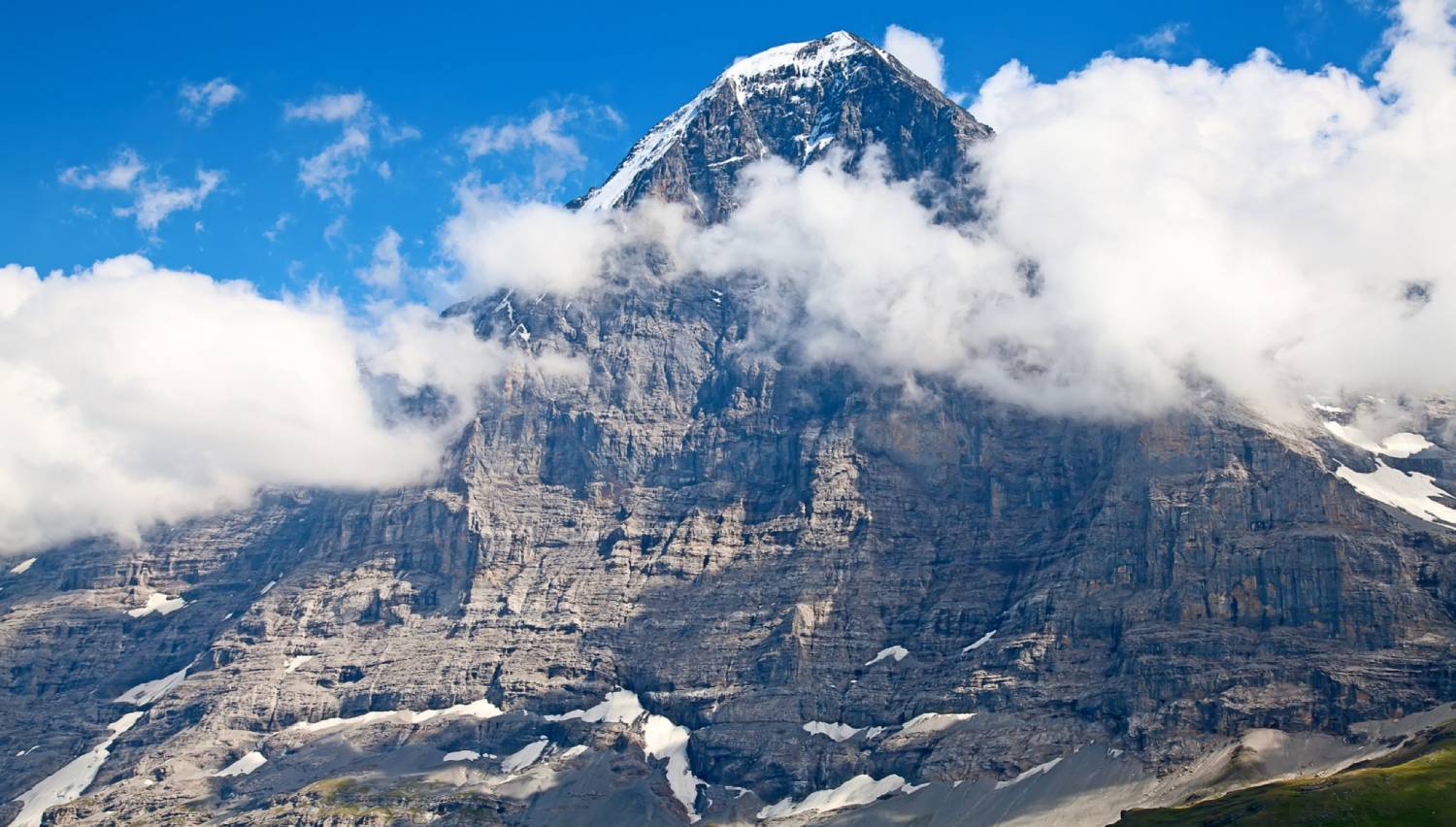 With a peak at almost 4,000-metres, Mount Eiger is one of the most spectacular mountains in Switzerland, and its sheer size will hold you in awe. Whilst it is most famous for the extreme demands on those seeking to climb its northern face, there are also lots of other options for hiking and climbing, and there is even a scenic train ride to Europe’s highest train station! 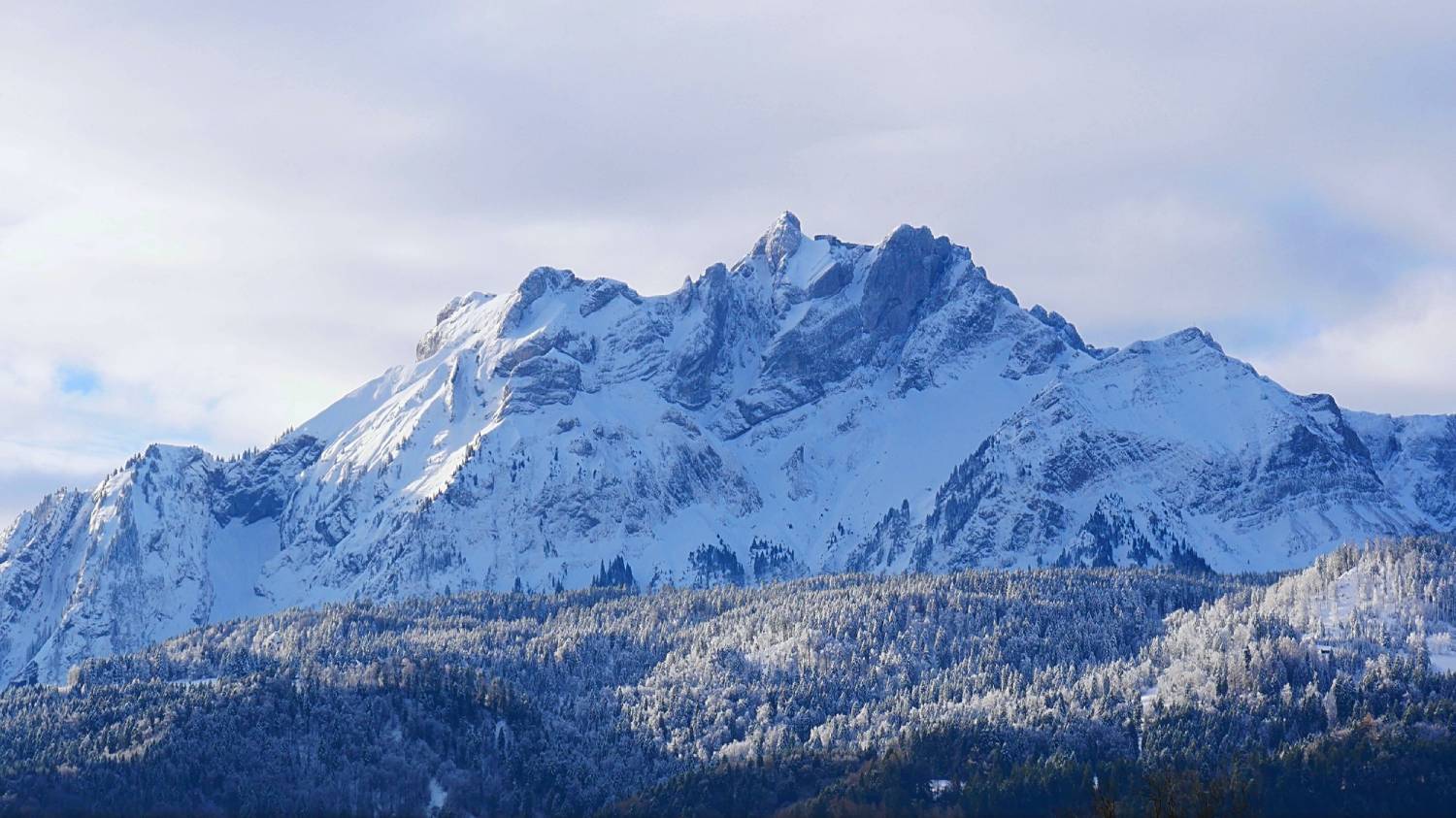 Take a short trip from Lucerne to enjoy the fun and the grandeur offered by the magnificent Mount Pilatus. Take the cog railway or cable car to the peak, and enjoy stunning views of Lake Lucerne and the Swiss Alps, from a height of more than 2,000-metres. While you take in the views, there are restaurants and hotels, and for the active, you can even enjoy some hiking or tobogganing! 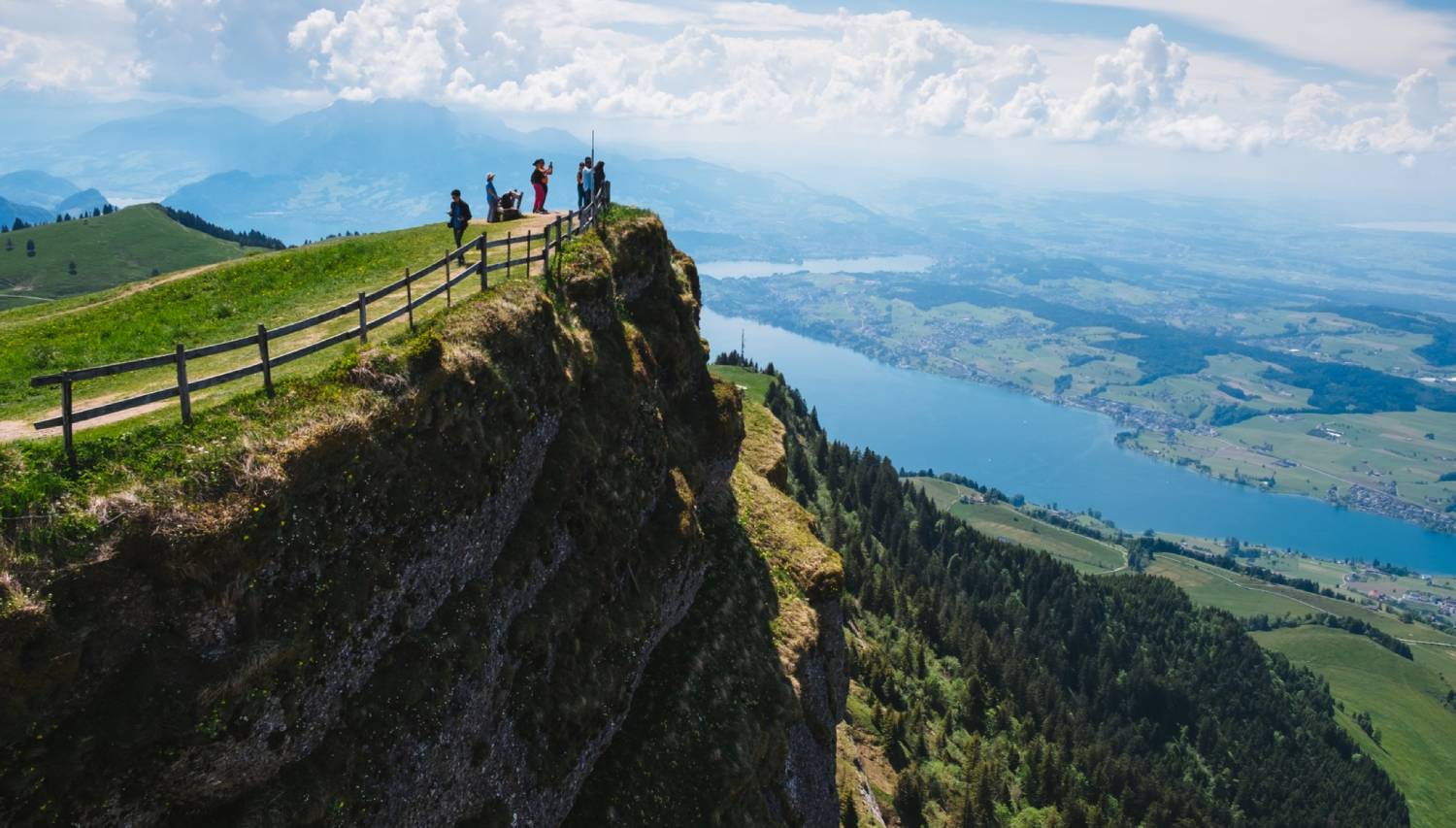 Have a terrific day out with a trip to enjoy the spectacular views from Mount Rigi. Take a short boat ride from Lucerne, then join the cogwheel train! As you pass through lush fields and thick forests, the views of the Alps and the lake stretch out across the horizon as you arrive at the peak. This is an amazing experience that should not be missed! 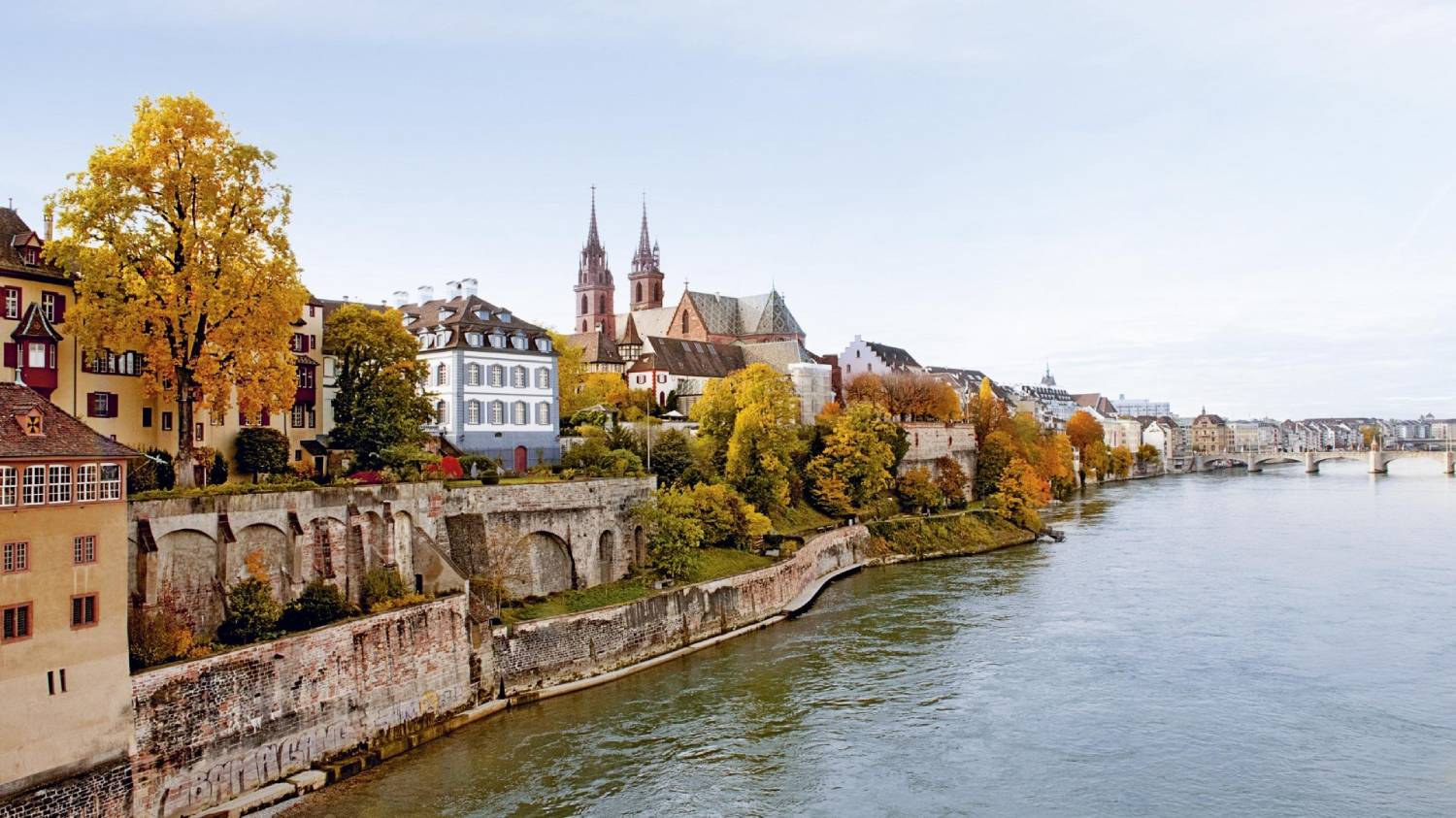 Hugging the Rhine lies Basel, a modern city steeped in history. Explore the multitude of museums (there are over forty) as you stroll the streets, soaking up the medieval history and the haunting Gothic cathedrals, then take a food tour and discover the culinary delights that are scattered throughout the city. When it’s time to relax, cruise the Rhine and get a unique perspective of the city, as you glide along the water enjoying the views. 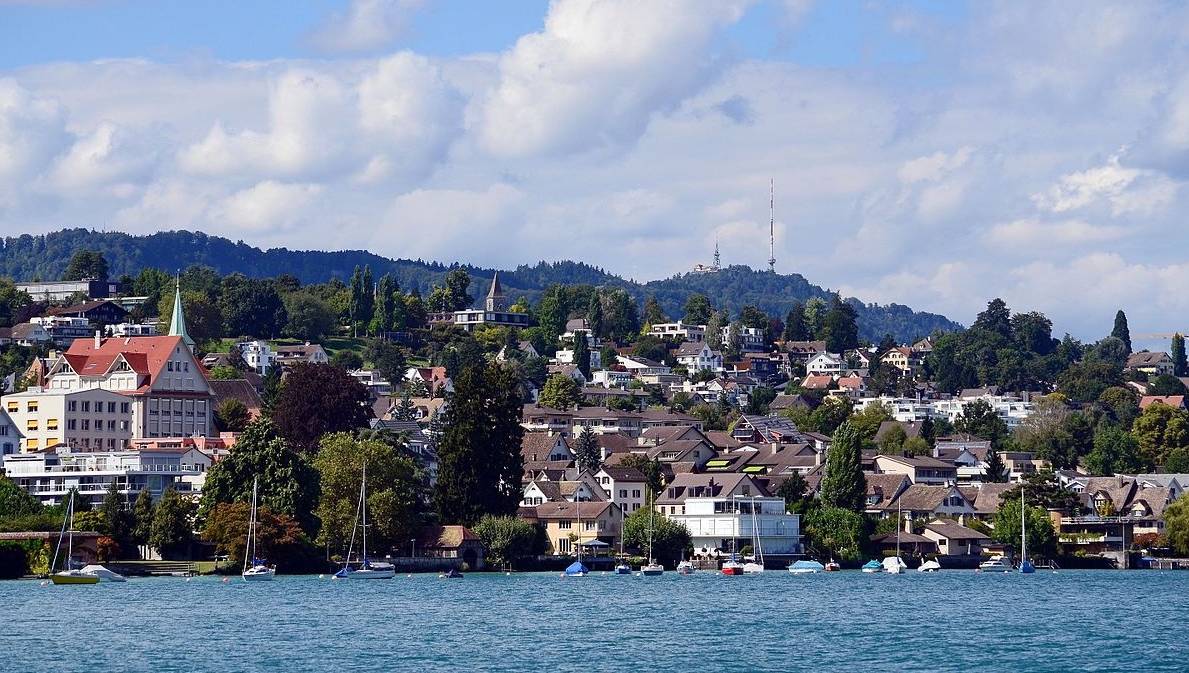 Take a bus or boat ride to Kilchberg, to enjoy the magnificent vistas of the Alps! Before you leave though, make sure you’re hungry, so that you can sample the delicious confectionary at the Lindt and Sprüngli Chocolate Factory! Steeped in history, stroll through the magnificent town to absorb the traditional culture and sights, and keep an eye out for the many events and festivals held throughout the year. The Kilchberg community loves to have fun, so why not join them for the day!